Throughout his life, Winston Churchill described his depressive episodes as a “black dog” that hounded him in his most difficult times. Unfortunately, what was once an innocent childhood phrase has been used by many media outlets and scholars to prove that Winston Churchill’s had a mental disorder of sorts.

But where does the expression come from? The term “black dog” actually dates earlier than Churchill: it was common for nannies and Governesses to use the term “black dog” to describe bad moods in children. This, in turn, was influenced by the English myth of a church grim: a supernatural entity that took the shape of a massive black dog that would guard church cemeteries. With a surprising degree of prescience, one of Churchill’s private secretaries, Jock Colville, warned media outlets of the time that ole Winnie’s blues might be misdiagnosed as depression. Unfortunately, he was right.

A quick search online using the keywords “Churchill” and “depression” will produce hundreds of links, books, and other resources all pointing to Winston Churchill’s alleged bipolar disorder. Many of these sources argue on whether or not Churchill had bipolar disorder, or major depression. In fact, even medical sources, like the National Association for the Mentally Ill, or NAMI, prominently includes Winston Churchill alongside Beethoven, Van Gogh, Tolstoy, and Abraham Lincoln in a list of famous persons who have lived with a mental illeness.

But cursory glance at this sources reveal two things: first, writers of medical credibility who have the qualifications to make the diagnosis are, in fact, lacking in details of Churchill’s life. Second, writers who study every minute detail of Churchill’s life are woefully ill-prepared to make psychiatric diagnoses. Regardless, the common thread between these two things is clear: Winston Churchill was bipolar.

However, even a quick look at the DSM (Diagnostic and Statistic Manual) of psychiatry will show that, despite Winston Churchill exhibiting some of the symptoms, this doesn’t mean that he was mentally disordered. Let us consider the DSM’s nine criteria for “Major Depressive Episodes”:

One of the most prominent signs of depression, depressed moods include feelings of loss, sadness, numbness, hopelessness, and a slew of other negative emotions. Many of those who claim that Churchill was depressed continuously point to his writings that refer to a “black dog on my back” as a clear sign of depression.

But these depressive moods seem to be just that: moods. They are fairly reasonable responses to difficult situations. Notice that every instance of the term “black dog” in Churchill’s writings was preceded by some kind of disastrous occasion, like Dardanelle, or the Blitz. It isn’t fair to characterize grief as clinical depression, particularly from a man who had to undergo several trying and agonizing instances in life.

“Like a sea beast fished up from the depths, my veins threatened to burst from the fall in pressure.”

Churchill writes this poetic line shortly after losing his position as First Lord of the Admiralty, following the failure of the 1915 Dardanelles Campaign. But even this severe blow to his career did not stop him from being fully consumed with his new passion for painting, nor his renewed fervor in reviving his fledgling political ambitions. In fact, he often states that “The Muse of Painting” salvaged him from the pits of despair, and he joyously referred to it in many of his writings. A clear indication of someone losing interest or pleasure in life? I hardly think so. 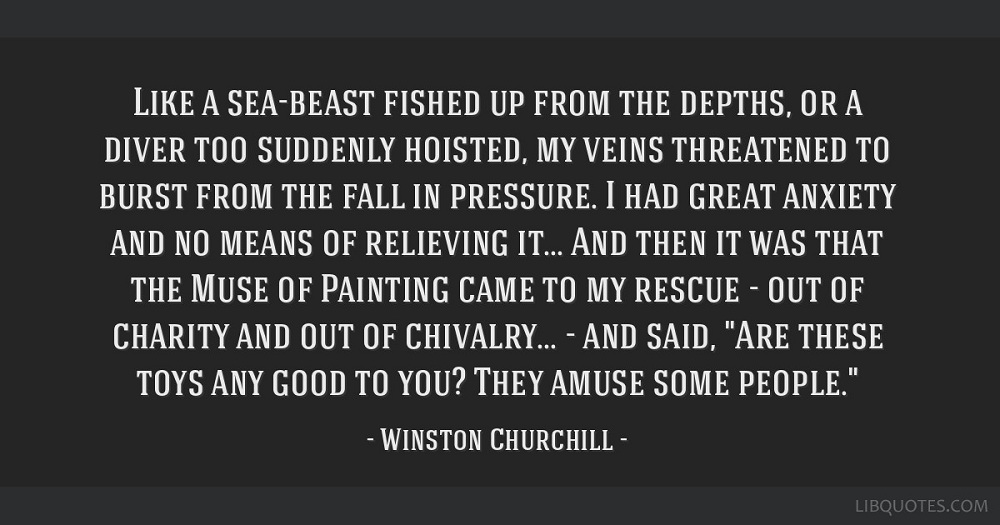 Many photos and accounts of the time painted a Winston Churchill who was consistently burly in his youth and a tad overweight during his later years. But despite several instances of so-called “depressive episodes”, his weight remained consistent. This is not in line with the DSM’s evaluation that depressed people suffer significant weight change; it simply wasn’t the case with Winston Churchill.

Many critics point to Churchill’s seemingly inhuman ability to stay up all hours of the night and be fully awake the next morning. However, Winston Churchill himself credits this to his practice of taking prolonged siestas, or afternoon naps, a practice he learned from his time in Cuba. While he burned the midnight oil, he wrote extensively, a pastime he enjoyed immensely, once again supporting the premise that he never lost interest in life.

The DSM refers to psychomotor agitation as any extreme movement that would cause alarm in people: constant hand-writing, skin-rubbing, severe twitching, none of which Churchill was prone to, not even in his later years.

As for psychomotor retardation: Churchill was a lifelong athlete who loved the outdoors. From an early age all the way to his fifties, he actively rode horses and played polo whenever time would allow him, he even rode to hounds ‘til his seventies.

Fatigue or Loss of Energy

Anyone who ever experienced Churchill first-hand would often write about the man’s superb energy, a trait that he carried with him throughout his entire life. Rarely did Churchill exhibit persistent fatigue or loss of energy. In fact, even as his circulatory illness started taking a toll on his body, his colleagues still found it difficult to keep up with Churchill’s pace. Where others would take a vacation or loll around in the sun, Churchill constantly busied himself until his mid-eighties, either with writing, reading, or his favorite activity, painting.

Even at an early age, Winston Churchill was a confident man. In fact, his fellow soldiers would often describe him as reckless, charging into enemy positions as if he was bulletproof. Any military defeat incurred, Churchill took as an opportunity to learn and become better. Even his father, Lord Randolph, would not have believed that Winston ever felt “inappropriate” guilt, considering that he spoke disparagingly of his son’s self- confidence after getting into the Royal Military Academy at Sandhurst. Perhaps he spoke of disappointments, temporary despairs, but rarely were those feelings maintained: Churchill was known for a constant, positive ego, something that many around him admired. 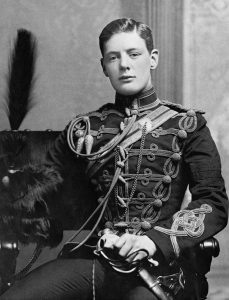 In his old age, Winston Churchill would often question whether or not he had done enough, but this is hardly an indication of “feelings of worthlessness”; rather, it’s common musings of a man who has done so much and still wants to do more. Hardly did anyone close to him spoke of Churchill exhibiting any “guilt” for any shortcomings he may have had. If anything, his confidence bordered on arrogance, but never quite passed that threshold.

Known for his sharp wit and even sharper tongue, Churchill was a man of constant clarity; his speeches would often draw crowds in Parliament, regardless of whether or not he was inebriated (and ole Winny certainly enjoyed a drink or two!). His quick decisions, seemingly reckless but in fact extremely well-calculated, were a highlight of his career, all of which contributed to swift resolutions to situations that would have left others in a quagmire.

An oft cited example of Churchill’s “thoughts of death” is his quote about not standing beside train tracks. Many have concluded that this was because Churchill’s impulse would compel him to commit suicide, but aside from this isolated quotation, no other evidence can back up the claim that he often thought of suicide. It is also, in my opinion, wrong to assume that someone is immediately depressed if they say they do not like standing beside train tracks; yes, the thought of death crosses one’s mind, but this l’appele du vide is something that exists even in the mentally healthy. It is certainly NOT an indication of suicide ideation.

The DSM provides that a person must exhibit at least 5 constant and recurring symptoms for it to be classified as depression. And yet, reexamining Churchill’s life and the context that he lived in, we will find that he doesn’t fulfill even one of those symptoms.

To further the point, even the Diagnostic and Statistical Manual of Mental Disorders argues that “periods of sadness are inherent aspects of the human experience.” And Winston Churchill certainly had his fair share of experience: from serving in the army to becoming a politician and eventually into England’s wartime leader. To say that he was depressed simply because he experienced low points in various points of his life is absurd, not to mention damaging to his illustrious legacy.