From his time as an officer in the Queen’s Own Hussars, to his rise to prominence in the Liberal Party, and finally his leading of Britain as a capable and dependable Prime Minister during the war, Winston Churchill has certainly led a colorful, stressful, although ultimately, fulfilling life.

But even the great leaders of our time are not immune to sadness nor despair. He would often complain about being followed by the “black dog of depression.” Later, he would tell his doctor:

“I don’t like standing near the edge of a platform when an express train is passing through…I like to stand right back and if possible get a pillar between me and the train. I don’t like to stand by the side of a ship and look down into the water. A second’s action would end everything. A few drops of desperation.”

This “black dog” of sadness and despair would hound him all his life. However, when he was in a euphoric state, he showed it willingly and unabashedly. He would be so full of energy that he wound burn the midnight oil for months at a time, which he would use as time to write his books (43 in total). These mood swings have led many to conclude that Churchill was bipolar.

But is that a reasonable assessment? In my opinion: it is not. Winston Churchill did not have bipolar disorder.

Many authors use his plethora of personal musings as evidence of his bipolar disorder, owing to the fact that many of these essays spoke of sadness and despair, but they do so without context. Many of these same authors don’t consider the history and context of his writings, taking his words in isolation and diagnosing him with a mental illness. But the shrewd observer would note that these feelings of despair were often preceded by a high-stress situation that would leave even the most mentally healthy person in tears.

Churchill wrote plenty about sadness, and this is because he led a rich life that had plenty of opportunities to be sad. For example, after his loss of the First Lord of the Admiralty position, he wrote:

“Like a sea-beast fished up from the depths, or a diver too suddenly hoisted, my veins threatened to burst from the fall in pressure. I had great anxiety and no means of relieving it …”

Taken without context, it would seem like the musings of a clinically depressed man. However, consider that he wrote this after the disastrous 1915 Dardanelles campaign, which resulted in the loss of hundreds of British lives. Does this seem like a reasonable response? I like to think that it is. In fact, anything short of sadness or despair in this trying situation would be more suspicious.

Bipolar disorder also comes with many psychological symptoms that, frankly, Churchill did not exhibit. In a previous article, I wrote about the reasons why Churchill couldn’t have been depressed, and those same reasons hold true for him not having bipolar disorder. He simply did not meet the criterias for manic depression nor manic euphoria. He never succumbed to despair, nor did he ever let his euphoria lead him to making terrible decisions. 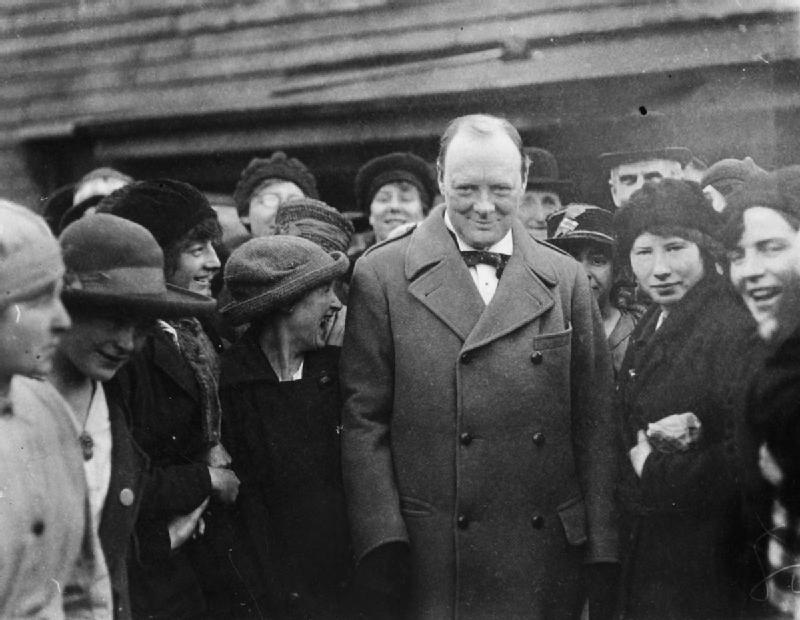 Did he have mood swings? Yes, he did. But is this a human trait? Indeed, it is.

But sadness, even crippling depression, are just as part of the human experience as euphoria. For it to be a disorder, it must be sustained over long periods of time, something that just never happened for Churchill. He maintained his zest for life, art, politics, and the nation, from his soldier days all the way to his death in 1965.

A Question of Interpretation

I blame our society’s penchant for classifying anything out of the tepid standards of normality as a mental disorder, and Winston Churchill was far from tepid: volatile, passionate, and certainly emotional, he was a larger-than-life figure who, perhaps, intimidated those who did not understand him fully. He displayed his emotions openly, leading many to think that he was unbalanced.

But nothing could be farther from the truth.

In reality, though he would lash out when angry and become increasingly manic when euphoric, none of his actions, decisions, nor treatment of the people around him were influenced by his emotions: at his core, Churchill was always a calculating man who based decisions on reason, logic, and empathy.

Many started to question his mental state when he entered Parliament, where he would tell his colleagues about his “black dog”, his avoidance of risky locations, and his thoughts on, and of, death. But this came at a dark time in Britain: across the channel, Germany was re-arming itself, threatening the lives of Jewish people not just in the country but across all Europe. With the Great War not even a distant memory for Churchill, the thought of going to war again must have taken a severe toll in his mood.

But this alone cannot be used as a basis for such a diagnosis. Who wouldn’t despair at a time like that, or be bothered by dark and disturbing thoughts?

“To Whom Fate was Entrusted”

Despite these negative thoughts, Churchill could not have been suicidal nor depressed for a very simple reason: he believed in destiny, specifically, his own. Even at an early age, and despite not being religious, Churchill believed that his life had purpose from God, that all his struggles were but preparations for a final trial that will test his will.

Though not a religious believer, he seems to have felt that his life was ruled by a kind of destiny in which he was being prepared for a supreme trial.

Such were the life and times of Winston Churchill, to whom fate had entrusted Britain. Churchill knew his role in protecting his country from the ravages of war. He simply could not afford to be depressed, or bipolar, or any other disorder there is.

In a time of great crisis, Winston Churchill rose to the occasion, served his purpose, and brought glory and honor to Britain. The actions of a mentally disordered man? One can hardly think so.