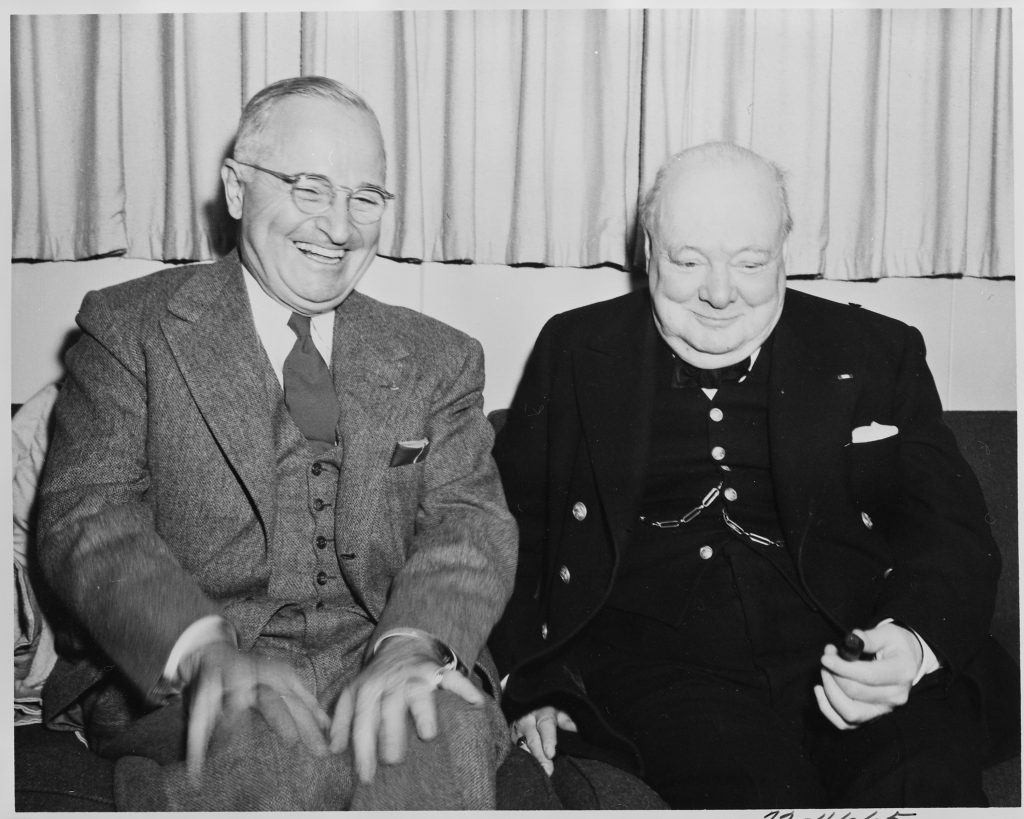 It is March of 1946; the Allied forces of the United States, the United Kingdom, and Soviet Russia had secured its final victory over the Axis powers just a year ago and were still busy rebuilding Europe and dismantling the Nazi war machine. However, while the U.S. and the U.K. were drawing up plans to restore entire countries to their former glory, the Soviet Union was secretly trying to maneuver itself as the dominant power in the region.

Luckily, Churchill and Truman did not stand idly by.

Prior to March 5, 1946, Fulton, Missouri was just a humble Midwestern town that, despite their small size, represented the best of Middle America. But they had a claim to fame that was hard to beat: the local Westminster College produced one of the United States’ most prominent politicians: Harry S. Truman.

In his now-historic “Sinews of Peace” speech, Winston Churchill delivered a powerful observation about the state of the world post-war. With almost prescient-like accuracy, he predicted a conflict that would arise between the United States and the Soviet Union, one that would be fought through proxy states, spycraft, and threats of nuclear weapons.

This “cold war”, as the term will come about, would fracture the tenuous peace between the superpowers and create a division between the different supporters of each country, with the “First World” countries bearing the standard of peace and democracy allying itself with the United States and the United Kingdom, and the “Second World” countries who would be annexed by force by the communist Soviet Union.

In October of the previous year, Winston Churchill and his Conservatives had just lost the general election, with Churchill losing the Prime Minister position, one of very few defeats the Prime Minister has experienced since Churchill’s early political years. However, good fortune was not far behind: soon after the devastating loss in Parliament, Churchill received a letter from Westminster College President F.L. McCluer, requesting the veteran statesman to deliver an address regarding the then-current state of world affairs.

There were a few factors that contributed to Churchill agreeing to this invitation: first, Westminster College was right smack in the middle of America’s heartland, a good place to start if you wanted to reach popular support from across the pond. Second, Churchill saw it as an opportunity to re-establish himself as a convincing and powerful speaker, the first step to reclaiming his position as Prime Minister. But the key deciding factor was a handwritten post-script at the end of the invitation letter which read:

“This is a wonderful school in my home state. Hope you can do it. I’ll introduce you. Best regards, Harry Truman.”

None other than the President of the United States himself had requested for Churchill. The pair had met only once before during the Potsdam Conference in Cecilenhof, Germany. However, during the conference, Churchill had found Truman to be distant and quiet, and this speaking engagement at Westminster College would be a perfect opportunity to connect with the U.S. President to talk about the American Democratic Experiment, the European flashpoints, and everything else in between.

Upon arriving at Westminster College, the program commenced with full pomp and ceremony, with both Truman and Churchill receiving honorary degrees from the school. It wasn’t a small affair: 8,000 Fulton residents attended the talk, with more than 20,000 visitors from all around the state of Missouri.

The “Sinews of Peace”

Churchill’s “Sinews of Peace” is now widely seen as a de facto beginning to the cold war, with both the term “cold war” and “iron curtain” being birthed on that spring day in Missouri. The speech brought up the special relationship between the United States and Britain: former colony and colonizer, but now strong allies against the imperialist ambitions and the communist regime of the Soviet Union.

The speech itself, although speaking about new adversaries, fell short of describing a possible Third World War. In fact, despite talking about a cold war and how weapons of mass destruction could be involved, Churchill also laid out a plan for peace, which involved building structures and organizations that could stave off a nuclear showdown between the two superpowers.

However, reaction to Churchill’s speech was lukewarm, at first. With the entire world still reeling from the effects of the Second World War, both England and the United States still viewed the Soviet Union as an important ally, and a friendship they didn’t want to compromise. War weariness was prevalent with a majority of people from both sides of the Atlantic, and Churchill’s alarm-sounding was met with doubt, and it didn’t help that Churchill’s health problems from smoking were making people nervous about a sudden death during a critical hour.

But this small measure of doubt was enough to start shifting American attitudes towards their so-called friend the Soviet Union. Suspicions about the Soviets intentions started cropping up in conversation, and soon enough, even President Truman would soon make moves to counter the Red Scare.

How the Iron Curtain Speech Affected the Truman Doctrine

With Churchill, Americans found a credible ally that would warn them about the dangers of communism and how the Soviet Union was all too eager to spread their cruel ideology. While a majority of people were still on the fence, it wasn’t long before Truman’s White House would adopt a containment policy that sought to limit Russian influence on the world.

This containment policy would soon be dubbed the Truman Doctrine, a set of foreign affairs practices that were aimed at countering Soviet expansion, both physically and ideologically. Announced in 1947 and further expanded in 1948, the Truman Doctrine was essential at keeping Soviet activities in check and was instrumental in helping countries like Greece and Turkey to resist subjugation by the Russians.

The Truman Doctrine was passed with the help of senior members of Congress, who saw through the thin veil of peace and recognized the inevitable threat that the Soviet Union posed towards America and its way of life, with then-Undersecretary of State Dean Acheson comparing the Soviets to a rotten apple that could spread its disease (i.e. Communism) to the entire barrel (i.e. the World).

During a joint session with Congress in March 12, 1947, Truman said:

“I believe it must be the policy of the United States to support free peoples who are resisting attempted subjugation by armed minorities or by outside pressures. I believe that we must assist free peoples to work out their own destinies in their own way. I believe that our help should be primarily through economic and financial aid which is essential to economic stability and orderly political processes.”

While there were some dissenters, the speech itself was received by the rest of Congress with positivity, so much so that in just two months, Congress had approved a $400 million request from the White House to provide Greece and Turkey, then under threat from communist insurgents, with military and economic aid.

Through the Truman Doctrine, the United States government pledged to protect democratic nations from external and internal authoritarian forces, a thinly-veiled threat against any attempt by the Soviet Union to undermine not just America’s allies but their sphere of influence in general. Taking a cue from Churchill’s concept of “sinews of peace”, America’s Truman doctrine shifted its foreign policy from tenuous withdrawal during regional conflicts into a more proactive stance, one that could even involve intervention in far away conflicts, should that conflict involve either an Ally or their sphere of influence.

In Asia, the Soviets and the Americans found a new battleground where they competed for the hearts and minds of over a third of the world’s population: bulwarks of American culture and military power in Asia included South Korea, Japan, and the Philippine islands, while the Soviets had strong footholds in North Korea, a strong alliance with Communist China, and rising influence (which would lead to eventual communist rule) in Vietnam. Meanwhile, most of Malay Southeast Asia was well within the British sphere of influence, a status quo America was keen on keeping using the Truman Doctrine.

Although the Truman Administration crafted the policy on their own, many elements of Churchill’s “Sinews of Peace” speech definitely influenced the Truman Doctrine as a whole, most notably with the official use of the term “Iron Curtain” as a metaphor for the Soviet Union’s blatant expansionism and the spread of the Communist ideology.

Beyond its $400 million aid package to Turkey and Greece, the Truman Doctrine pledged a total of $13 Billion to the Marshall Plan: the Allied powers’ overall plan to rebuild Europe from the ground up. However, that aid came with a price, most of which involved limiting Soviet military movement across European state lines. Josef Stalin called both the “Sinews of Peace” speech and the Truman Doctrine as “war-mongering” and “imperialistic”, with his Soviet government instituting its own policies of limiting American and British military assets from moving across their sphere of influence in Eastern Europe. And thus began the Cold War, an indirect conflict that will last from 1947 all the way to the collapse of the Soviet Union in 1991.